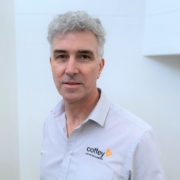 The Sydney Laboratory Manager role requires someone with a deep knowledge of the complex science behind testing.  Russell overlooks speciality testing across aggregates, soils, concrete and rock servicing a highly complex and broad client base.

Russell’s thorough approach ensures risk is reduced and reliability of accuracy is increased.  He’s built his career over many decades in testing and QA Management joining Coffey as Project Manager for a large road construction project in Southern NSW.  Since this project Russell has been involved in the running of multiple site laboratories at locations across Australia.

Russell has been a NATA signatory since 1994 and has been responsible for the success of significant projects such as the Wheatstone LNG Project Laboratory, APLNG Curtis Island Laboratory, APLNG Reedy Creek and Condabri Laboratories as well as many major transport projects throughout NSW, Australia.

Russell’s ability to apply the technical interpretation of specifications to de-risk or enhance construction methodologies is highly sought after by our clients.  This ability coupled with a take no shortcuts approach is what sets Russell apart in the industry.

Work with us on your next project