Coffey Testing supplied a variety of geotechnical and materials testing services as well as associated quality assurance activities for multiple contractors on the Gorgon Gas Project. The Project was built using a restrictive 1.3% of Barrow Island, a Class A nature reserve, off the north west coast of Western Australia. 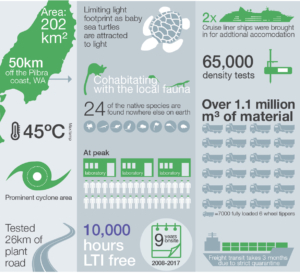 Coffey Testing had 3 separate laboratories on the project with over 30 trained geo-technicians delivering material testing services across the 3 train LNG Project. The Project won awards for the exceptional environmental protection efforts with quarantine control and flora and fauna welfare and protection control. The Project is widely considered Australia’s single greatest resource development.

With temperatures up to 45 degrees Celsius, personnel safety was of critical importance to monitor. Whilst delivering to highly efficient levels, Coffey Testing managed to achieve over 10,000 hours worked without a Lost Time Injury (LTI). Across the whole project we managed to conduct over 65,000 density tests across 1.1 million cubic metres of fill used in tight working parameters around the plant and associated infrastructure as well as testing 26 kilometres of haul roads.

The Project taps into the Jans Field which is approximately 140 kilometres out into the Indian Ocean from Barrow Island and greater than 1,300 metres below sea level. In order to access and transport for processing, the Project required the construction of deep-sea pipelines that cross the ocean floor including an escarpment that rises several hundred metres from the Jans Field to Barrow Island.

Along with Jans Field, the Gorgon Gas Project will also draw supply from the Gorgon Field which is one of the largest gas fields discovered within Australia and sits approximately 70 kilometres from Barrow Island.

The Project was a greenfield operation and included a 3 train, 15,000,000 tonne per year LNG plant as well as a 300 terajoule capacity domestic plant.

The technical complexity of the Gorgon Gas Project, particularly considering the diligence in reducing impact to a Class A nature reserve, is unparalleled globally. Due to the extreme control measures adopted for quarantine reasons on the Project, shipping of supplies took over 3 months from specially designed quarantine yards in Perth.

The island maintains 24 unique animal species that are not found anywhere else on earth, the health and survival of these species were at the top of the Project’s priorities and all parties to the Project were expected to assist wherever possible. Coffey Testing is proud to have been involved on the Project for 9 years and play a part in such wonderful environmental success in construction. 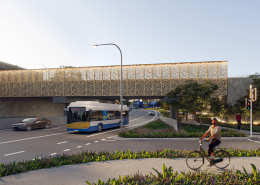 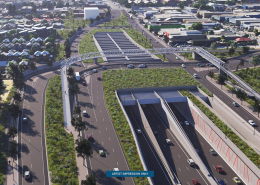 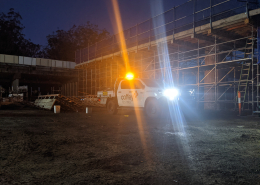 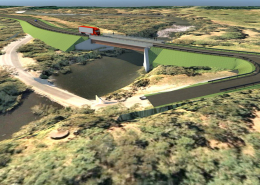